As Apple best put it in one of their recent commercials for the iPad, “What’s a PC?” We live in an era where the personal desktop computer is basically obsolete. Our mobile society that’s working on global citizenship in both political and literal terms, isn’t interested in being tied down to a desk, an office, or even a city any more.

Because of this on-the-move mindset, tablets are all the more important for maintaining our way of life.

As tablets have developed over the years, since the release of the iPad in 2010, we’re finding more of life can be lived fluidly. And nearly every electronics company on the planet has a variety of tablet models, even companies known for products like cameras and eyewear.

As you look for a new tablet, it’s important to examine multiple makes and models. To help in your search, we’re going to take a look at several Polaroid tablet reviews from across the web.

A Brief History of Polaroid

As a company, Polaroid is world famous for cameras and film. The Polaroid camera became famous because it combined all the functions of a darkroom inside of a single portable device. This meant users could take a picture and instantly see the results of their photography.

In the 1930s and beyond, Polaroid was the “Apple of its time,” because of its incredible innovations.

Formed originally by Edwin Land in Cambridge, Massachusetts in 1937, Polaroid’s initial market was based around polarized sunglasses that were developed from Land’s research at Harvard University.

Land was actively involved in the research, development, and applications of his company’s technology. Utilizing its patents in polarizer technology, the company made a name for itself with a wide array of products that included glare-reduction goggles marketed for dogs, and 3-D movies.

During World War II, Polaroid manufactured a wide range of military products for the armed services. These products included an early version of a device used for infrared night viewing.

However, it wasn’t till after the second World War that Polaroid released the product that made them a household name. In 1948, Edwin Land debuted the first Polaroid Land Camera. This is what we eventually came to know as the Polaroid Instant Camera.

Over the next thirty years, the company continued to grow, and released new and better forms of their trademark camera.

By the 1980s, the company was embroiled in a lawsuit with Kodak over patent infringement. It was also during this time that Land was ousted by his own company after an $89 million dollar failed attempt at introducing a Polaroid instant home movie camera by the name of Polavision.

During the 1990s, the company released various camera related technologies but had fallen behind the times, and eventually proved unable to catch up to their competitors.

Ultimately, the company filed for bankruptcy in 2001.

In recent years the Polaroid name has begun to bounce back. The name has started to be licensed out for use on products made by other companies.

It is important to always research what you are buying, especially when the company marketing the item may have had little to no say in the development, and production of the item. When a company was known for innovation and quality, putting that name to a product they don’t manufacture puts the consumer at risk of purchasing shoddy workmanship.

Because of these changes in the Polaroid’s licensing, we’re going to take a look at the tablets under their name. 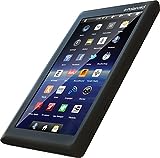 One of the tablets with the Polaroid name is a seven-inch tablet. Features listed on the Polaroid website include:

What Do People Say About the Polaroid 7-Inch Tablet?

Polaroid tablet reviews on Amazon are split down the middle about this device. A little under 50% of consumers rated the Polaroid 7-inch with four or five stars. The rest of the reviews were pretty low.

Others said that because of the inexpensive price of the Polaroid 7-inch tablet, they purchased them for their children to use. The device handles eBooks, games, music, and video well, which is generally all children do on devices like these.

Several new tablet users felt that the Polaroid tablet is easy to start and use and gave them confidence with a new type of technology.

Polaroid tablet reviews reveal one major complaint: the Polaroid 7-inch tablet is that the recommended USB keyboard and tablet stand don’t actually pair with the device.

Other complaints stated that the tablet drops Wi-Fi frequently. Reviewers complained that even when they were less than a dozen feet from their router, they could not get the device to pick up the WIFI.

Part of the device’s problem is that the built-in antenna is low quality and degrades in quality rather quick.

Another frequently mentioned complaint is that the battery drains quickly. Any attempts to multitask with the device will result in it being drained at an unreasonable pace.

Others complained that the operating system can run slowly and freezes up regularly.

Those who attempted to get customer service assistance had negative complaints as well. The interactions with customer service were stressful and resulted in customers getting in no help with their issues.

For those who attempted to get help online, they stated that the Polaroid support website isn’t laid out very well.

One reviewer attempted to solve their tablet problems by downloading updates to the drivers. All the update files downloaded from the website were corrupted and didn’t work.

What Do We Say About the Polaroid 7 Inch Tablet?

If you just need a media device for your kids, it would potentially do the trick at a much lower cost than many other tablets on the market.

Ultimately, the negative reviews outweigh the positives for the Polaroid 7-inch tablet and we’d recommend looking elsewhere for a new tablet.

Polaroid offers a 9-inch sized tablet. On the Polaroid website, the features listed include:

What Do People Say About the Polaroid 9-Inch Tablet?

Some of the positive reviewers mentioned the tablet is great for playing video and music without hiccups. Reading high graphic materials, like comic books, works well on the Polaroid 9-inch tablet, and audio books and text materials work great.

Ultimately, the positive reviews given demonstrate that the Polaroid 9-inch tablet is quite functional as a media player.

On Amazon, 60% of users gave one star for the Polaroid 9-inch tablet.

Reviewers said that the tablet is slow while trying to download anything from the internet, or any sort of updates. Any attempts to load the app center are nearly impossible.

Various attempts to get apps from Google or Amazon were problematic, and the tablet could not properly install the program.

The device itself has extremely poor Wi-Fi. Holding the device even six feet away from router means no connection. Most likely, they have defective antennas.

Other complaints concerned accessories for the Polaroid 9-inch tablet:

If those problems aren’t enough, consumers complained of terrible customer service. One customer mentioned that in the many attempts to get technical support, he was bounced around for hours, from operator to operator. Finally, the live person that was connected with the customer had an extremely poor grasp of English. The reviewer was unable to understand the speaker.

The average life expectancy of the tablet for those who could get it to work beyond a couple of days was, at most, four to six months.

Finally, the tablet reviews mentioned that it does not adequately perform its task described as a tablet. At best it seems to act as media player and not an actual tablet.

What Do We Say About the Polaroid 9-Inch Tablet?

Based on the significant number of negative reviews, and the highly limited positive reviews, we would not recommend purchasing the Polaroid 9-inch tablet.

Especially since the simplicity of the device pretty much makes it only usable for a child needing a simply media player.

The final Polaroid tablet reviews we’ll look at are for the Polaroid 11.6-inch tablet. The website BHG says that it is a versatile tablet that is designed for both when you are on the clock at work and when you get home.

The screen is large enough to fully enjoy your collection of music, movies, eBooks, games, and other digital entertainment. For those who need one, the detachable USB keyboard is included.

If you hate swiping or second-guessing your typing skills, the keyboard is a must for computing.

What Do People Say About the Polaroid 11.6-Inch Tablet?

The sole reviewer who gave a 5-star rating for the Polaroid 11.6-inch tablet did not choose to elaborate on the favorite features or functions of the tablet.

Of the available reviews, some said that the tablet instantly had problems from the second it was taken out of the box and turned on. Many of these issues included:

Many reviewers returned the tablet within two days of receiving their purchase.

What Do We Say About the Polaroid 11.6-Inch Tablet?

With having so few reviews to pull from, and two thirds of the reviews being negative, we cannot recommend to the Polaroid 11.6-inch tablet.

Like the other two tablets reviewed in this article there are just not enough good things about this device to justify spending the money on it.

The once innovative name of Polaroid seems to have been tainted by these tablets.

They are being manufactured by other companies and sold under the umbrella of the well-known Polaroid name. This proves to be a misleading action by all the companies involved. Brand names are important, and can help you find quality products, so this feels a bit like false advertising.

Each low-quality tablet is rated only positively for use as a media player.

On top of the poor workmanship, the hassles of customer service for the Polaroid tablets makes them a poor investment. And with dangers, such a catching fire, and the complete lack of reliability of the devices, Polaroid tablets should not be considered viable options for purchase.