Are you tired of lugging around your laptop when all you want to do is listen to music or read a book? Do you want to have quick access to all of your files from a device that has a detachable keyboard and can fit right into your purse?

It may be time for you to look at getting a tablet.

What Exactly is a Tablet?

In short, a tablet computer is a type of portable personal computer. While the specifics on tablets can range widely, there are some key features that all tablets have in common.

These include an LCD touchscreen, rechargeable batteries, and an operating system similar to systems used to run mobile phones.

In many ways, the tablet is functionally similar to a smartphone. The major differences between a smartphone and a tablet is that the tablets are larger in size, and may not have the ability to have access to a cellular network. Many tablets can be connected 3G or 4G, however, which closes the gap difference on many models.

Today every major company that creates consumer electronics is producing tablets in one form of another. The benefits of having a portable multimedia device over a traditional desktop computer usually outweigh a consumer’s hesitation on owning multiple devices.

There are, of course, 2 in 1 computer options, which merge the concept of a laptop with a tablet.

The game changer in the computer industry was Apple’s introduction of the iPad.

Due to the success of the iPad, tablets have become one of the fastest growing segments of consumer electronics. Ever since the iPad became available to consumers, the standards and expectations for the function and uses of a consumer electronics have raised considerably.

Tablets, specifically, have higher and higher standards to meet every year, with lower prices expected.

As the market has become saturated with so many quality and junk tablet options, it can be hard to know where to begin looking, or what kind of device would best meet your needs.

Which Tablet is Right for You?

With so many tablet options, you’re likely struggling to know which one would suit your needs best. You should ask yourself these questions as you look for your tablet. 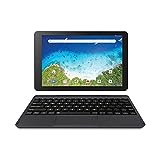 1. Uses for The Tablet

What are your exact needs in your tablet? Will you be watching movies or streaming YouTube videos all day? Or will you just be using your tablet to scour the web for cute outfits?

Do you need to have an easy-to-stow tablet that will fit easily in your purse or backpack? Do you need a keyboard for your tablet?

Thinking through all of the uses you expect to need your tablet for can help you determine a number of other factors that will steer you towards the right tablet. The more specific you can be about your needs, the more easily you’ll understand the right choice.

2. The Size of the Tablet

If you’re looking for a tablet to toss in your purse on the run, you’ll want a smaller model than the nearly full-size tablet options that function like full-on computers.

If, however, you’re more interested in word processing options, you should definitely consider a tablet with a larger screen that’s compatible with a keyboard large enough to comfortably type on.

What kind of operating system do you need on your tablet?

There are three main operating system to keep in mind; Android, iOS and Windows.

Android is developed by Google and has all the advantages for a product created by such a robust company. Advantages of this type include support for multiple logins.

This feature makes the Google run devices that are great for sharing with your whole family. And thanks to Google Play, any app you buy for your Android phone can be downloaded for free on your tablet.

The iOS is Apple’s operating system. If you enjoy Apple devices, then you know what to expect with these more consumer-friendly interfaces.

Major plus sides are a user interface that’s simple and easily used by anyone newer to computers and electronic devices. If you’re more familiar with Windows or Android devices, you’ll have a minor transition period of learning the system.

Another advantage to the iOS is that the Apple app store is ahead of the competition for viewing media and playing games.

Windows tablets have software created by Microsoft. If you are planning to use your tablet for a lot of traditional computer work typically done on a laptop, then this may be your best bet.

The main reason for this? Windows tablets have Microsoft Office, which means you have traditional word processing as well as classic spreadsheets programs.

What features are most important to you?

When looking at the various features that are offered in tablets, it’s important to think about the advantages of what is offered:

There are countless accessories available with various tablets, as well, and should be taken into consideration as you shop.

How does the front-runner tablet compare with others?

Before deciding on the make and model of your new tablet, you should go to a local store and check out various tablets in person. We’d recommend going to a few different stores, and then making your purchase after you’ve spent a little time in consideration.

Compare the features in person. Consider the weight and feel of each tablet in your hands. What’s most comfortable? Is the screen big enough? How does the keyboard feel?

You can also check out the brightness settings, screen resolution, included accessories, and included apps. Test out the virtual keyboard.

You can also take advantage of sales personnel and ask any questions that you haven’t found the answers to during your online searches.

What is your budget? Is there any wiggle room in case you find a better tablet for a little higher cost? Do you have anything for accessories, or does your figure include everything? Will you be getting a 3G or 4G plan?

Your budget is one of the biggest deciding factors for choosing the right tablet. You’ll need to set a basic budget to start and develop it from your minimum up to be capable of including accessories, data plans, or software and apps you’ll need to meet all of your computing needs.

The RCA Viking Pro has webcams and is both Wi-Fi and Bluetooth enabled. The product description on New Egg promises that this device has a powerful enough processor to be able to multitask both for fun and for business.

A 2-in-1 tablet seeks to combine the flexibility of a P.C. with the portable conveniences of a tablet device. In the instance of the RCA Viking Pro, the 2 in 1 function means it’s got a detachable keyboard so that the computer becomes a tablet.

What Do You Real Users Say in Their RCA Viking Pro 10.1 2in1 Tablet 32 GB Quad Core Reviews?

Reviewers on eBay give glowing reviews for the RCA Viking Pro, with overall ratings of 4.74 out of 5 stars. The reviews point out a number of positive qualities of the Viking Pro, including a long battery life, and a good quality screen.

Another positive quality they praise is the clear, bright screen, and the easy-to-use touch screen. Many people also mention that the screen size on the Viking Pro is great for watching movies.

Some reviewers specifically mentioned that there were no issues connecting online, and downloading apps using Google Play was easy on the Viking Pro.

Commenters state that they feel the RCA Viking Pro is a great deal for the price.

Furthermore, reviewers say that the Viking Pro is durable enough to purchase for a child. It can survive being dropped.

The great design for separating the tablet from the keyboard is also praised by users. People say that the two separate easily without fear of breaking the device in the process.

Finally, users state that the Viking Pro is lightweight and easy to handle.

While there were many positive qualities mentioned in the reviews, some people did have negatives to share. Many of these reviews seemed to indicate individual scenarios, rather than manufacturing flaws. These insights are still valuable to help others avoid the same issues.

Users on Amazon gave negative mentions that shortly after purchasing the Viking Pro charging ports both stopped working. Other said soon after purchase, the keyboards broke.

To save on manufacturing costs, RCA chose to build the case from cheap plastic. If you do purchase an RCA Viking Pro, be sure to purchase a case, especially if your kids may handle the device.

Some commenters said that the cheap plastic case feels uncomfortable, and that other brands feel smoother.

Some users stated that the keyboard is uncomfortable, and that the touchpad mouse isn’t very responsive to touch.

Additionally, the cameras on both back and front side are low quality. The cameras barely work for Skype and are horrible at taking photographs. This is not that unusual for a built-in webcam for a standard laptop, but typically, a better quality camera can be expected on a tablet.

Others mentioned that the onboard speakers are low quality. They stated that it’s difficult to hear anything from the computer/tablet, and that you need to use headphones.

There are a lot of positives about the RCA Viking Pro, though some reviews were mixed on these features. Some said it’s highly durable, while others complained that they break easily.

We tend to believe it’s likely to be a bit shoddy. The price indicates a low-quality item, though, so we shouldn’t expect a premium item.

If you really need a budget-friendly tablet, and you don’t have kids, the RCA Viking Pro is an option. However, we’d only recommend for a fill-in or low-budget option, and not as your standard computing device.